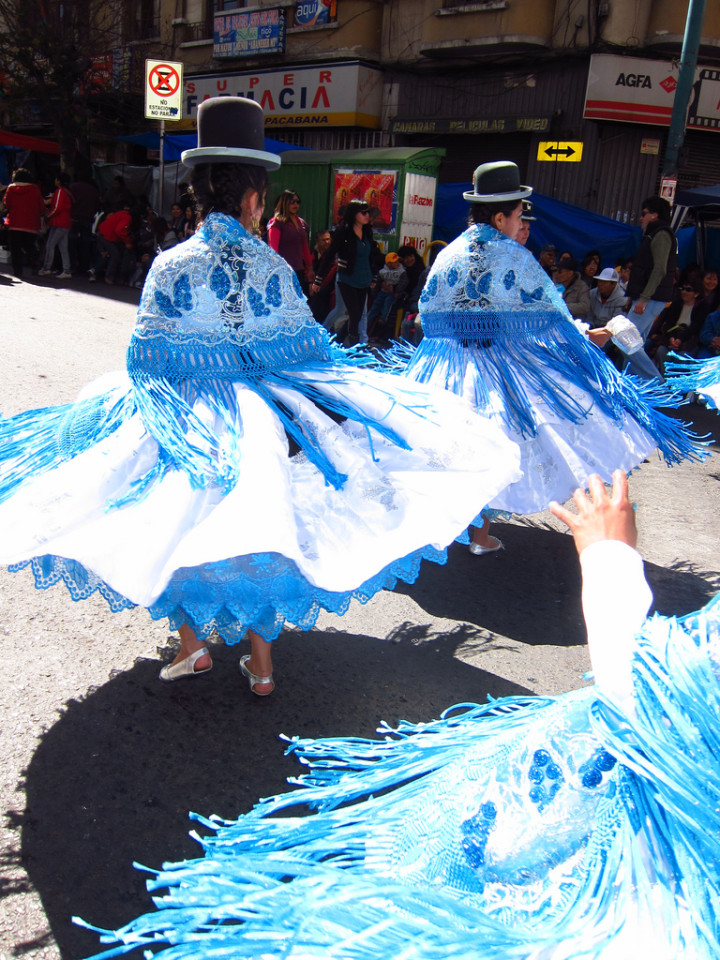 And they are so much better at it than North Americans. Our last day in La Paz we figured we would just hang around and maybe take another look at their epic market. We were really just killing time until our evening flight to Panama. As we walked out of our hostel toward the city’s center we noticed that most of the streets were blocked off to traffic and a surprising number of impromptu stoves had been set up by enterprising women hawking sausages, anticuchos de corazon (heart meat on a stick, tastes much better than you’d think!) and fried baby fish.

Hmm.. the day may be a li’l more exciting than we had planned. We walked toward the noise declining beers and street meat every few steps. Difference #1. In Latin America the entire festival is a beer garden; Drinkers are not corralled into little cages. Before we knew it we found ourselves swept up into a seemingly never ending parade of men and women in elaborate costumes dancing and playing instruments down the street.

We began walking up the parade against it’s flow like salmon desperately trying to swim upstream. A stream of ribbons, satin, sequins, clowns and marching bands.

“Wow” I breathed to Tom, “is today La Paz day or something?”

“I don’t know” he replied equally overwhelmed by the amount of people both in and crowded around the sides of the parade. “It’s gotta be some kind of big holiday”.

According to the taxi driver who drove us to the airport that evening, taking a circuitous route to avoid the revelers still drinking and dancing in the streets, it was just a University dance. Not actually a holiday, just a day when University students decided to throw a dancing parade in the streets. An idea that La Paz whole-hearted embraced, obligingly shutting down half the city for all the vendors who also thought the whole idea was smashing. Difference #2. In Latin America the only reason one needs to have a party is the love of a good party!

North Americans have a lot to learn.