Our travel style (as in literally moving from one place to the next) most closely resembles what you see when you strap a GPS to a cat. When not riding dolphins, we tend to sort of meander from one place to another, moseying along and making destination plans after talking with other travelers.

When we do actually need to be in a particular place on a specific date we tend to get a little stressed. It conjures up images of rushing through cities we may want to explore further, having to stay one night at a time in several different towns or (worst of all) stomaching days of long, uncomfortable bus voyages and bad rest stop food.

I try to avoid even thinking about these things, so it took me by surprise when in Kampot, Cambodia I glanced at a calendar and realized we had about four days to cross a border and make it to Mui Ne, Vietnam. I frantically started some travel planning and discovered that for the amount of time left to us we basically had two overland Cambodia to Vietnam options.

a. Take a 1-2 hour bus/taxi from Kampot to the Ha Tien border crossing. Take a moto taxi to the bus station and take another several hour bus ride to another town. Stay in that town for one night and then take 2-3 long (8-10 hour) bus rides to get to Mui Ne, stopping for one night in different towns along the road to avoid overnight busses.

Ugh. Neither of these ideas appealed to me one bit, so I started to dig a little deeper, and that’s when I got this bright idea!

Once I saw the three options laid out like this our choice was clear and our path once again set. The clouds of indecision and fast-travel-stress broke apart and the sunshine of our awesome new plan shone though. I love taking something you dread and turning it into something to look forward to!

Step-by-step specifics of our journey

1. Minibus or Taxi to the border at Ha Tien. Taxi was $30 for the car, minibus is much cheaper. We had read online that the minibus may miss the ferry connection and that you may need to spend a night in Ha Tien. We are not fans of only staying in a place for one night (which was our reason for this whole route in the first place!) so we opted to take a taxi to the border. This way we did not have to wait for a bus load of people to go through immigration before us. I imagine one of the mini busses would get you there in time, but we did not want to risk missing the ferry and so can only vouch for the method we chose. Many of the hotels on Phu Quoc would not even confirm a reservation unless you were coming by plane as missing the ferry is so common.

2. Mototaxi to the ferry 6km away, $5 for both of us. There are some moto-taxi scams at the border that we had been warned about before the trip. This is what happened to us: We were approached on the Cambodian side of the border by two moto taxi drivers who told us they would take us across the border and to the ferry for $20. We nicely said “no, thank you” and started to walk across the border. They went with us and kept insisting that the border needed to be crossed on a taxi, that it was too hot to walk, or anyhting else they could come up with to try and get us on their bikes. We continued to occasionally say “no, thanks” but mostly tried to ignore them. We walked across the border and through immigration. Once we were officially in Vietnam we approached some moto taxi drivers and asked how much they would charge to take us to the ferry. They told us $2 per moto, or $4 total. When the original two drivers saw us talking to other drivers they came over and yelled at the men who talked to us. They told us $20 because it was over 20 km to the ferry. I said, “i’m pretty sure it is 6 km, look that sign there says Ha Tien, 6km,” while pointing to a sign that said “Ha Tien 6km”. They yelled that the signs were wrong and it was much farther so the price was $20. The driver who had told us $2 sort of whispered and motioned that he could not take us as long as the yelling drivers were there. It makes sense, he did not want to start trouble with some guys he has to see every day.

So we just started walking in the direction of Ha Tien. The original moto taxi drivers kept following us saying “$18” and then “$15.” We told them we would go with them for $5 total, or $2.50 each. They followed us and yelled at us for about 5 minutes before they said “OK $5.” I really didn’t really want to ride with them at that point, but it seemed as though they had claimed us, and like a jealous lover if they couldn’t have us, no one could. I really didn’t want to walk 6 km to the boat so we climbed on the back of their motos and went the 15 minutes to the ferry. They yelled at us some more at the end when we paid them the $5, but we sort of expected that. Long story short, if you can just lose the taxi drivers that wait on the Cambodian side you should.

4. After several days of beach time take a 45 minute flight to HCMC, $50 per plane ticket through VietJet. 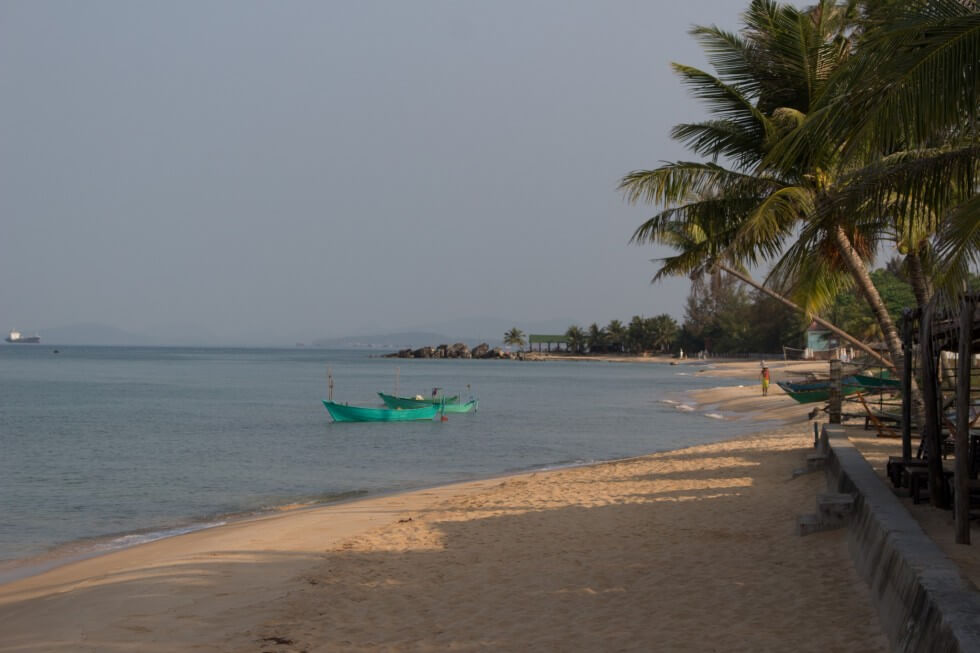 Everyone has their priorities and for us, it is just so worth it to take what could have been a grueling, (though I am sure very interesting) 2-3 day trip and change it into an island holiday. Since we run our business while we travel, it also makes more sense for us to spend hours that would have been on a bus working on the beach with the local mermaids.

Not to mention playing with kittens, eating fruit, watching dudes take sexy beach pics of each other, going for walks and swims, and playing the days away on oversized beach toys.

There are many ways to get from Kampot, Cambodia to Vietnam, especially if you have lots of time to slowly meander. This is just the info on the way that we chose to get there, which is definitely not the cheapest way, but certainly is comfortable!