Puerto Princesa – Home of The Lorax & a (New) World Wonder 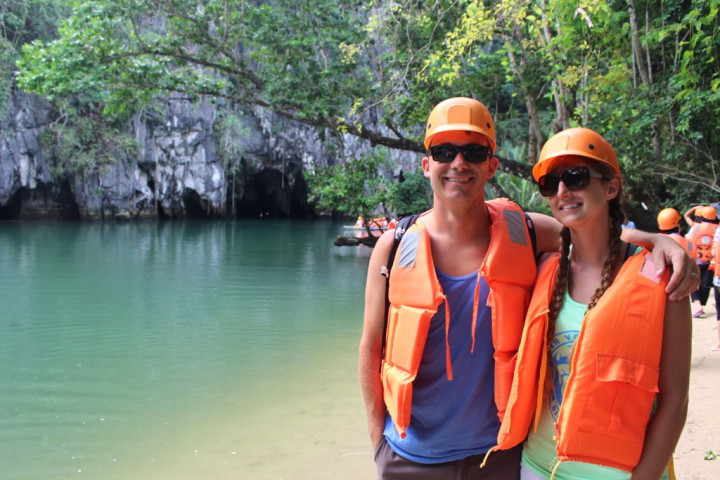 I was expecting to sort of hate Puerto Princesa. Most of the blogs I read warned travelers to get out of there as soon as possible warning about the slumminess of the city, the putrid smell and the abundance of trash.

I am happy to say that my expectations were completely and totally unmet. What I first noticed when we came into the city was the abundance of trees.

Now there are lots of trees all over the Phillippines. Tropical rainforest covers most of the archipelago. But in other places the jungle surrounds the little towns and cities, here the town is built around the jungle. Shops and houses are literally built around trees and it turns out that chainsaws are highly controlled, permitted and are not legally allowed to be moved from one neighborhood to another without extensive paperwork.

Due to the harsh restrictions on damaging the trees in this city Puerto Princesa is the first carbon neutral (and is actually carbon-negative) city in South East Asia. 65% of the city is covered in forest. Amazingly this was not mentioned in any of the posts I read about it before coming there. Lucky for us it wasn’t. It’s always nice to expect a dump and instead be greeted by a pretty lovely little forest-land.

The main reason we were in the capital of Palawan was the same reason that most travelers stop through Puerto Princesa; to catch a flight and to see the underground river. On November 11th, 2011 (11/11/11) a group called the New7Wonders decided to once and for all have an “official” set of 7 natural wonders, and 7man-made wonders of the world. They are not associated with Unesco or the UN. They are a private company that wanted to have a definitive list of what 7 natural sites were the most wonderful.

I don’t really get it to be honest. I think it’s great that everyone has a different list of “7 wonders,” it just means that there are a whole lot of super wonderful things in the world. Also, isn’t it kind of subjective what is wonderful? Someone may be completely blown away by a place, or a thing while another person observing it may feel completely unaffected.

That said, even if I’m not buying the whole “official” 7 wonders thing, if we are going to be passing by one, then by golly we will definitely check it out. Even without all the hubbub if someone just said, “hey you should go check out this thing that I thought was kind of neat” I’d be all over it.

The “Wonder” is an 8.2 km. navigable river that winds through a cave before flowing directly into the South China Sea. It includes major formations of stalactites and stalagmites, and several large chambers. At the mouth of the cave, a clear lagoon is framed by trees, which are home to monkeys, large monitor lizards, squirrels and other small animals.

It’s a nice cave. We liked it. We like caves so we maybe even liked it better than most. It would not make it to our personal list of the 7 natural wonders of the world. It probably would not even make it to our list of the 7 most wonderful natural places we have been. If you are catching a flight in or out of Puerto Princesa you should go check it out though, we think it was kinda neat.