I love theater in almost all of its forms and seek out different types of productions in every place we visit. We’ve seen shows that range from the incredibly boring, to the spectacular and admittedly, I’ve been known to occasionally fall asleep, leaving Tom to suffer in silence through another incomprehensible puppet show, or Geisha musical show. After experiencing so many types of performances, in so many different places, our expectations are quite low. Though it is always an experience, we rarely know what is going on and often only enjoy the shows for about half as long as they last. 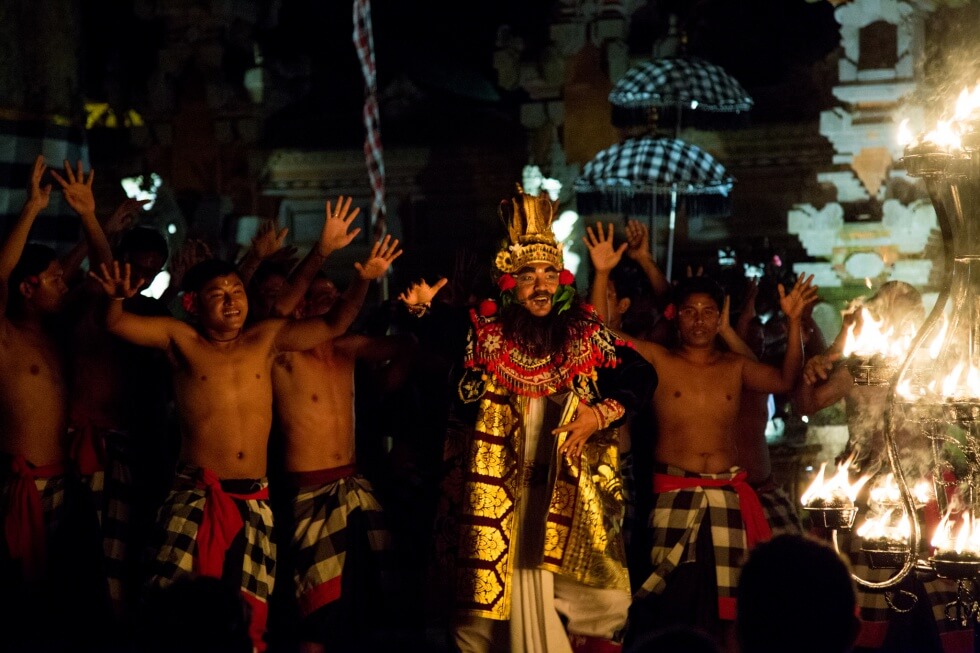 This hasn’t stopped us from trying and thank goodness for that since otherwise we would have missed the spectacular Kecak Fire Dance in Ubud Bali! We decided to go see the Kecak performance in Junungan village based on a recommendation from Never Ending Voyage’s post about Ubud.

The performance tells an epic from the Ramayana, but the best part is the music that is created throughout the entire performance by the circle of at least 100 men wearing checked cloth around their waists, percussively chanting “cak” together to create amazing rhythmic music. There were easily four times as many chanters as there were audience members and their voices filled the night, drowning out the sounds of passing motorbike traffic or barking dogs.

Kecak has roots in sanghyang, a trance-inducing exorcism dance. The chorus waves their arms in the air, or sways in unison, dancing while seated to the rhythmic sound of their own voices to show battles and other plot points in the story. 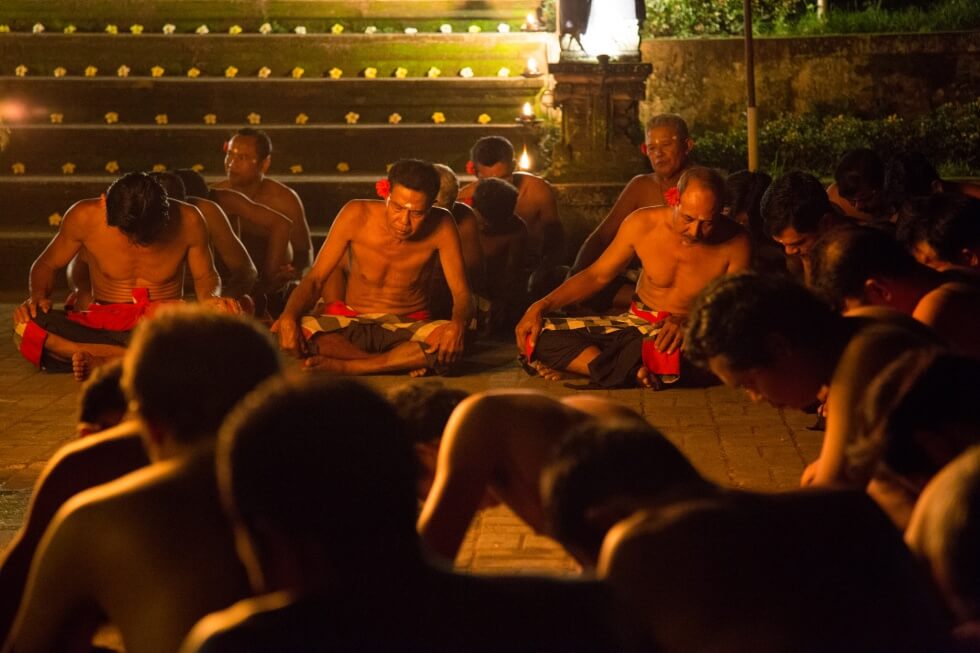 A pamphlet is included with a scene by scene breakdown that makes the hour-long performance easy to follow, but truthfully it’s just as fun without it. We loved watching the Kecak singers, most of them had huge grins on their faces the whole time, they were either pretending or performing is the highlight of their week.

The dancers performing the Ramayana epic were fun to watch and we enjoyed their costumes and make-up, but this performance is all about the sounds of the singers. Both the percussive chanters and the piercing plaintive sounds of the narrators who sung out the dialogue over the chorus. 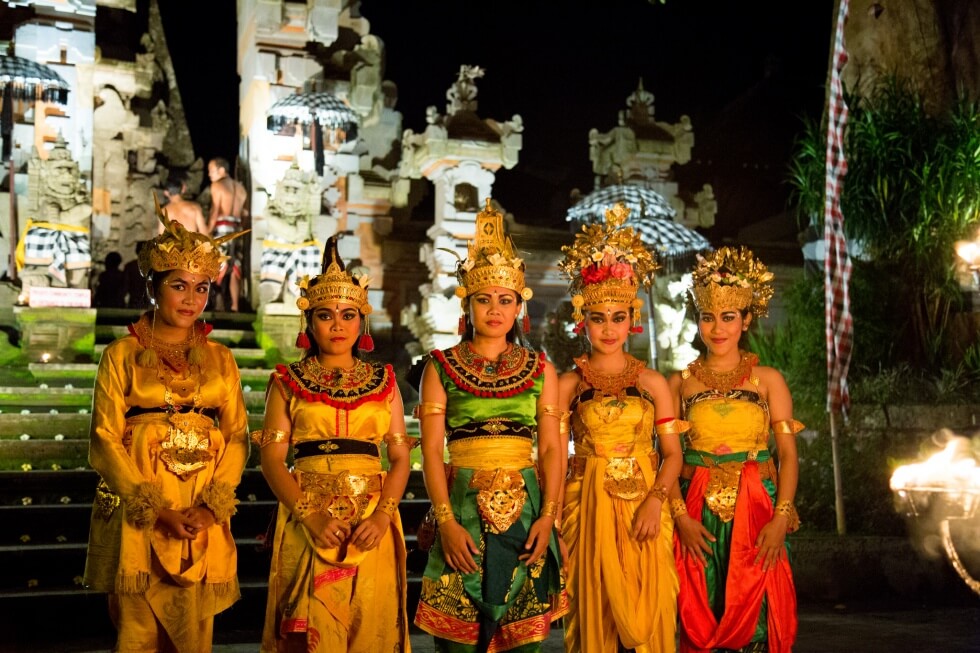 It is called the “fire dance” for a reason; at the beginning torches were lit in the middle of the stage and during the huge battle between the giants and the monkeys a the end of the show, several performer grabbed torches and blew huge fireballs into the night sky. It made for some good photos, but it was by no means the highlight of the show.

The highlight was the simplicity of the seated men creating a wall of complex sound. There are no sets, orchestra, or fancy bells and whistles, but the effortlessness of the bare-chested men in checked sarongs weaving their voices together acapella for the hour with the village temple as the backdrop, makes for an exhilarating performance. 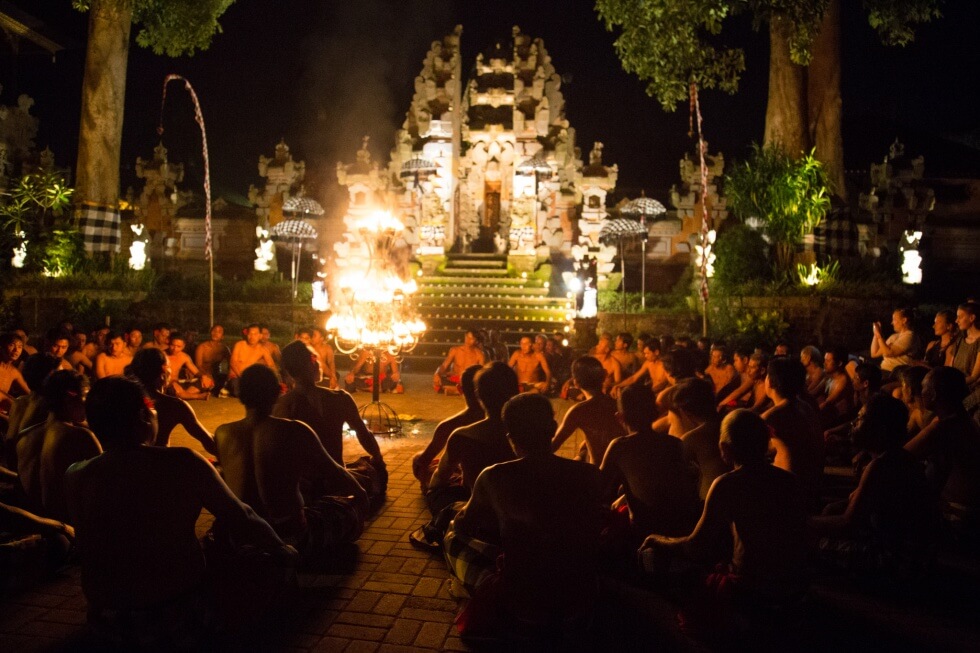 Though we loved the Junjungan Village performance, there are many Kecak performances throughout Ubud, check out the Ubud performance schedule here.

Where
The show is held at the Junjungan village temple on Jalan Tirta Tawar, about 4.5 KM from Jalan Raya Ubud. If you drive up Jalan Tirta Tawar you will not miss it and all taxi drivers know where it is.

When
The perfromance is held every Monday night at 7:00 PM

How
The show cost 75,000 IDR, which is a little over $5.00 USD depending on the current conversion rate. All of the money from the show goes to the village temple and the different activities it hosts for the community.

All in all
We were both blown away and couldn’t stop grinning during and after the show. I would not miss this if you are in Ubud!